In August 2020, a project proposed by Solar Frontier K.K., was adopted by the New Energy and Industrial Technology Development Organization (NEDO) as a joint-research project to be supported by the programs “Technological Development for Promoting Solar Power Generation and Making It a Major Power Source” and “Technological Development for Achieving Long-Term Stable Energy Source based on Solar Power Generation.” The aim of this project is to demonstrate a technology for the material recycling of waste crystalline silicon and CIS solar cell modules in a way that generates lower environmental burden.

The volume of solar cell modules that must be disposed of is expected to grow radically from the 2030s onward. According to NEDO, the estimated annual volume of disposed modules will peak at some point in the 2035–2037 period, reaching somewhere between 170,000 and 280,000 tons. Anticipating these circumstances, Solar Frontier has recognized the importance of establishing a technology that enables a low-cost and eco-friendly process for recycling solar cells as part of efforts to popularize solar power generation without increasing environmental impact. Therefore, since 2010 the company has been engaged in the ongoing development of technology for recycling CIS thin-film solar cells.

In FY2019, Solar Frontier took on the development of element technology supporting the material recycling of laminated glass-type solar cells through a joint-research project with NEDO. Building on low-cost decomposition technology established by prior R&D and technological demonstration activities, the project confirmed the ratio of material recycling can potentially be increased to approximately 90%.

Through engagement in the latest joint-research project, we aim to further advance this technology with the aim of reducing recycling costs and enhancing the eco-friendliness of the process involved.

Specifically, over the four years from FY2020 to FY2023, we will take on the development of a recycling technology for crystalline silicon-based solar cells in addition to the development of similar technology for CIS thin-film solar cells. In the course of this endeavor, we will also aim to contain the cost of separation processing at 3 yen/W or lower for both types of cells. Moreover, we will develop applications for separated materials in line with our target of achieving a material recycling ratio of 90% or more. To this end, we intend to build a continuously operating demonstration plant for processing commercial-size solar cell modules at the Kunitomi Plant (Kunitomi-cho, Miyazaki Prefecture), a production base run by Solar Frontier. We will thereby strive to demonstrate the targeted recycling technology by the end of the project period. 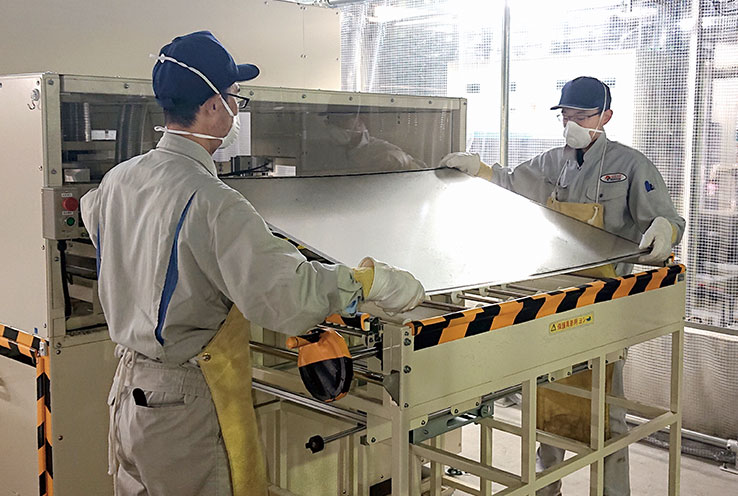